Having created their own unique patented shoe technology, Xelero is becoming one of the world leaders in walking and running shoes.

The Swiss technology behind each Xelero shoe systematically combines stability and cushioning with a dynamic forward motion, whilst the Eva midsole supports a comfortable, stable and accelerated heel-to-toe transition, providing impact absorption. These are the foundations that account for the entire Xelero shoe experience: 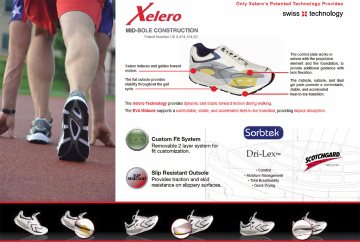 Based on a removable two layer system that allows for personalization, Xelero’s CFS (Custom Fit System) is flexible enough to adapt to various foot widths, accommodate common foot conditions, such as hammertoes or bunions, and provide plenty of room for further inserts or orthotics.

Sizes and widths - Xelero shoes come in many sizes to widths included Wide and XX-Wide (2E for women and 4E for men).

Because of their carefully-studied flatness, the outsoles provide stability throughout the gait cycle. Furthermore, traction and skid resistance are also provided on slippery surfaces.

Drilex is a multi-zone lining system that transports moisture away from the foot. The layer closest to the skin is made of 100% Hydrofil® nylon to keep feet dry, coo' and comfortable. Additionally, this type of technology helps to provide permanent antimicrobial and anti-odor benefits to various types of footwear. Xelero Shoes make the most out of this technology in order to optimize comfort and ensure that everyone will maintain healthy feet.

Leading specialists nationwide have agreed that walking with Xelero shoes is an experience unlike any other. For one thing, it is in the way that the Xelero technology works that users can begin to feel the change.

The entire process can be best described in terms of phases. To begin with, the first phase begins when the heel strikes the floor. As the heel makes contact with the ground, the impact forces are absorbed by the Gel pads included in the soft Eva midsole, thus reducing the risks of harsh impact and preventing the appearance of conditions, such as Achilles tendonitis or joint pain.

In the second phase, users can benefit from the cradling effect made possible thanks to the midsole rocker system which not only rocks but also stabilizes the foot as well.

Phase three is known as the Midstance stage. This is when the midsole rocker controls the foot and the stage in which the midsole provide cushioning for all of the foot's movements.

Stage four, also known as the Rolling Stance, comes soon after. In this stage, the Xelero rocker carries the foot through the entire gait cycle meanwhile the Control plate stabilizes the foot and minimizes flexion.

In the fifth stage, known as toe-off, the slight rolling of the foot helps relieve stress of the forefoot as well as the short plantar-fascia band muscles and toe flexers. As the body is dynamically shifted forward, the foot takes off the ground.

Even when it is a well-known fact that frequent aerobic exercise, such as walking or running is beneficial to maintain a healthy physical condition, it is also true that doing any of these activities with the wrong footwear can be potentially risky, especially to joints and muscles. What to do then? Foot specialists all around the globe have worked for decades looking for ways to optimize the already existing resources to come up with novel shoe-building alternatives that would cater for the needs of both the recreational runner as well as the most professional athlete.

Serious runners needn't worry anymore about over straining their feet and legs: Xelero has managed to blend technology with deeply-researched medical facts in order to come up with the state-of-the-art walking and running shoes they had been waiting for.