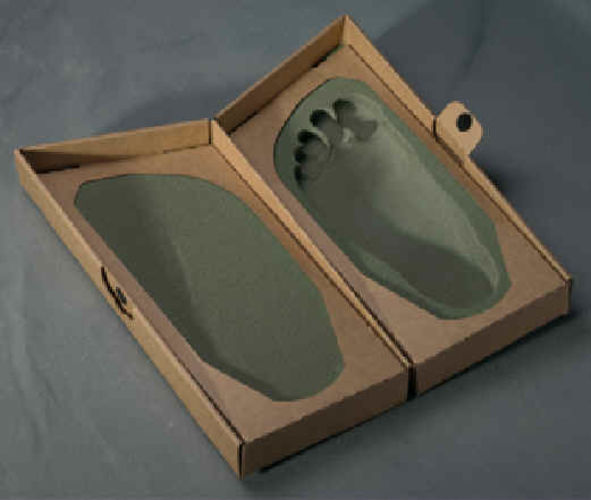 Ask a question about this product
Printable version

Custom Made Orthotics with Metatarsal Pad

Sports Orthotics with Foam - Custom Made


Add your own review


Gives enough for fitting cushion so pressure ulcers are kept in check even with using treadmill and hiking.


About 40 years ago I bought a new pair of shoes, but even after the normal "break in period" they still hurt. I eventually gave the shoes away, but my feet never stopped hurting. As an auto mechanic, I'm always on my feet, and was constantly running on concrete and asphalt, but now I was constantly limping, and spent evenings and weekends with my feet always elevated and tears in my eyes. Living one week at a time, and wondering when I was going to be forced to change professions. Took about 10 years or more before I was finally diagnosed with Plantar Fasciitis and got my first orthotics. They lasted several years, but eventually I needed to change them. I discovered there was only one model of New Balance shoes that gave comfort, but they don't last very long. But they only work if I insert orthotics in them. When it came time to replace my original orthotics I searched several possibilities, and found OrthoticShop had the best price, but also seemed to have the same or better quality than others. I'm always hesitant to go with lowest price, but they seemed to be the better choice, so I took a chance. I found their orthotics to be pretty much identical in quality to the original ones I paid twice as much for, and included a coupon for a discount on my next pair. So I took them up on the offer, and bought the second pair, which I used in a different pair of shoes. But they lasted forever. Each pair made it through perhaps 10 pairs of expensive shoes, and I spent a considerable amount of time trying to figure out where I bought them from. I assumed they were out of business, but eventually found them. After nearly 9 years after my previous order, I discovered they still had a record of my last order, and still honored the discount. The upper cover had since been discontinued, but they recommended a different material. The new ones seem to be of an even better quality, and almost a decade later are the cheapest pair I've ever bought, but may well be the best quality yet. Since I'm in my 70's (and still working) these may be the last ones I ever buy. In fact, I'm still using the old ones in my nearly worn out old shoes. But if I do need to replace them again, I'll get them from here. They are good people to deal with, and all three pair are of the highest quality.

Advantages: Top quality, made properly, and last forever. And at a low price, even though when it comes to hurting feet, price becomes your least concern. I would have assumed that by now I would have been on at least my 10th or 12th, not my 3rd.

Disadvantages: I have Plantar Fasciitis. :)


Very happy with my orthotics. Cured my plantar fascitis quickly and much lower price than doctor wanted. Thanks very much!


This product has been consistently good over the years that I have been getting them.


My reorder of my Amfit orthotic was excellent.